Bezoar Ibex in Turkey (Part 2); Guess the Length of These Horns!

Bezoar Ibex in Turkey (Part 2); Guess the Length of These Horns!

Editor’s note: If you haven’t already, be sure to check out part one of this adventure by clicking here.

The following day, our buddy Russell Marshall (below) took a great ibex, so Jay and I were the only ones remaining with open tags. Jay went with Tom, and I was on my own with my guides again.

We saw a number of pretty good billies in the morning, but nothing that my guys wanted to pursue. In the afternoon, we were glassing an area and had seen only one female, when we heard crashing, and the guys told me that was ibex fighting.

The area was quite brushy, and it took a while, but I finally spotted the billies 100 yards below the female. There was a hole in the brush, and periodically, the two would step into the open, rare up on their back legs and then crash their horns together. Then, they’d push their way out of site. It was a full out brawl, and we watched as we could for 30 minutes. When we left, they were still going at it. My guides didn’t think the billies were quite big enough, but it was one of the highlights of the trip.

We were driving down the highway headed to a new area when we got a call from Kaan, who had Jay and Tom with him. He told me they’d found a very big ibex that had unique horns that grew toward each other at the tips, but because Jay was looking for something in the 50-inch range, they weren’t going after it. He said they’d stay where they were and keep an eye on it if I wanted to check it out.

It was 2 hours before dark, and my guides said that we could be to Kaan’s location in 20 minutes, so I told them that I thought we should at least go look.

We hurriedly drove on the rocky mountain roads to the rendezvous point. After parking the truck, we made a short walk to where the guys had a spotting scope on the billy and his group of ladies. Kaan said the ibex’s horns measured more than 45 inches in length, but he was narrow and had the horns growing in. I looked at the billy in profile, and he looked great to me. In less than 5 seconds I told the guys I wanted to try for him.

We were low in a steep canyon, and the ibex were about halfway up the far side, and moving higher and to our left. They had gone around a fold in the canyon wall, so it gave us a chance to move around on our side and try to cut some distance.

We went as fast as we could, and when the animals came into view, we were luckily hidden in a stand of big evergreens. Kaan motioned toward a boulder, and I was able to get a pack on it and have a pretty good shooting rest. The ibex were 340 yards, but the billy was pushing the females around, and he never gave me a standing broadside shot. Each step increased the billy’s distance, but finally he stopped, slightly quartering away, at 388 yards.

I dialed the turret on my 4-20X Nikon Monarch 5 scope to 390 yards, and I settled in. When I felt solid, I touched the trigger of my Gunwerks 7mm, and to my great relief I saw the billy collapse the instant the 152-grain CEB Maximus bullet hit his shoulder.

After all the hiking and glassing we’d done, the stalk on the ibex I shot was pretty darn easy and happened very fast. I learned a long time ago not to look the proverbial gift horse in the mouth when a decent-size animal presents an opportunity, and I am sure glad I didn’t in this case.

My billy was incredible. Of course, the first thing the guides want to do is break out the tape as bragging rights between them come with the longest horns. The old ibex stretched the tape to 48.5 inches, but he was just so unique with the narrow horns that actually crossed in the back. 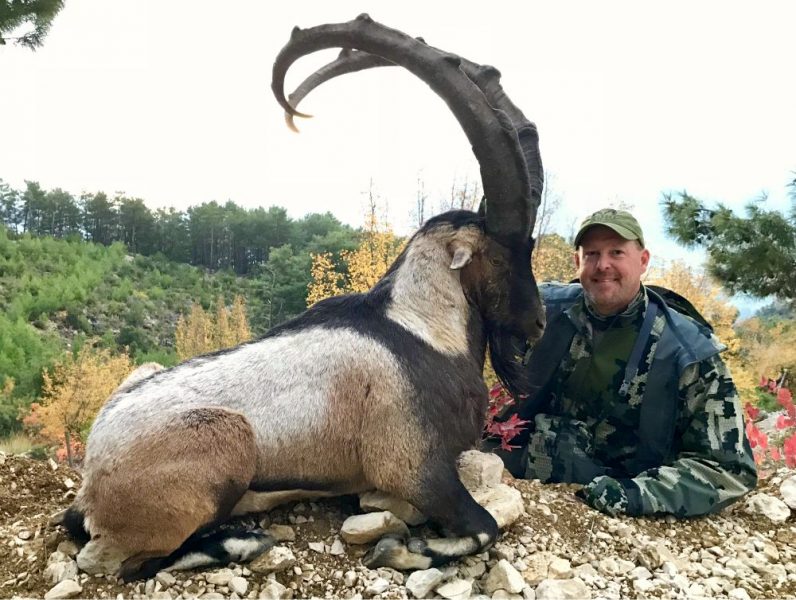 His coat was gorgeous, with the very light blonde body and contrasting black shoulder saddle, face and beard. His knobby horns were chipped from years of battles over breeding rights, and as I’m virtually out of wall space at home, his being narrow actually works very well for me when considering a mount. The narrow crossing horns did present a challenge when taking photos because I couldn’t lay his head back and have horn tips straddling his body. It made things a bit awkward, but I got some decent photos anyway just before dark.

An Ibex for All Time

The next day, Jay went out while Russell, while Tom and I explored the coastal town of Finike where our hotel was located. We hadn’t seen it in daylight, and we had a great time walking around the marina and sampling the local seafood.

That evening we met Jay for dinner, and he told us he’d tagged an absolute giant up high where he and I had seen the large group of females a few days before. They spent the whole day making a long stalk and waiting for the billy to get in a position for a shot. Jay finally dropped the 50-incher at 450 yards with a single CEB Maximus out of my Gunwerks rifle I had loaned him. (His ammo was sent to the wrong airport, and thus he couldn’t use his rifle on the trip.)

I was able to see and photograph Jay’s ibex the next morning, and it was truly something to behold. I think everyone in the village had their photo taken with it, so you know it was special. It had a noticeably larger and bulkier body than any of the other billies, and of course those horns are the kind dreams are made of. It was a great way to end the ibex hunt, but it didn’t end the trip.

We had three more hunters in our original group that had hunted their ibex about 2 hours farther on around the coast from Finike, and Ken, Lee and Bob had all taken excellent billies as well.

Russell, Tom and Ken departed for another area where they each took fantastic Anatolian red stags and wild boar. While Jay, Lee, Bob and I went back to the ancient ruins and then spent a day and a half looking around the city of Antalya (below). We had an unbelievable dinner with Kaan just before he headed out for Tajikistan to oversee a Marco Polo sheep hunt, and the following day we explored “old town” Antalya, which was a treat.

We all met back up the last evening in Istanbul, where we shared yet another incredible seafood dinner and celebrated one of the most enjoyable trips any of us has ever experienced.

When I got home, I told several people about the trip, and many had interest in doing the hunt. They asked if I would consider putting another WTA group together. Since then, I have secured prime ibex rut dates for 2019 with Shikar, and I even worked us out a $2,000 discount on the hunt price. There are a number of spots open, and I’m happy to discuss details with anyone interested. My contact info is at the bottom of this page.

If you like great hunting, wonderful culture, beautiful scenery and excellent food, this is a trip you absolutely should not miss. I am counting the days until I can go back.

As I mentioned prior, for this hunt I chose my Gunwerks 7mm topped with a Nikon Monarch 5 4-20×50 scope that has a custom XR turret. It is set up where I can range my target with my Nikon LaserForce bino/rangefinder combo, and then simply turn the turret to the given yardage. My turret is marked from 200 yards to 850 yards. I took a red marker and colored the marks every 50 yards for easy and quick recognition. It literally takes me 2 seconds to set the turret for whatever range I want to shoot.

I’m not a great long-range shooter, but this system simplifies things so much, that it makes shooting at 400-500 yards very doable for me. Jay Cohea borrowed my rifle and shot his 50-inch ibex perfectly at about 450 yards, and that was the first time he’d ever shot my gun.

The ammo I was shooting is handloads topped with Cutting Edge Bullets 152-grain Maximus. I’ve become a hug CEB fan over the years, and the Maximus is the best of all worlds in normal hunting caliber bullets in my opinion. This bullet was designed to have a high BC and produce massive trauma. 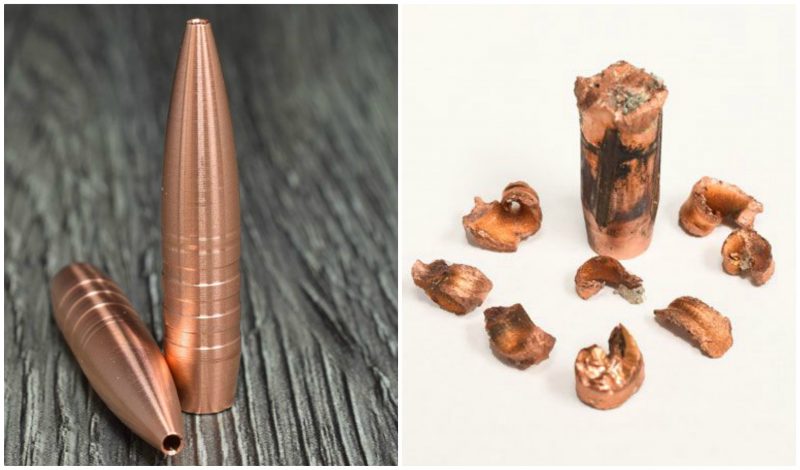 The Maximus has deeper penetration and is more destructive than the Raptor series bullets, which I’ve also used in the past and found to be terrific. After penetrating 4-6 inches, four to eight blades of the bullet break off (see photo above) and create one massive wound channel. The number of blades shed is dependent upon velocity; eight blades will break off at impact velocities over 2,400 fps, and below that, four larger blades will break off down to 1,400 fps.

Maximus bullets feature a sleek, smooth profile and a unique SealTite Band. This patented technology is a band slightly larger than caliber diameter around the body of the bullet, which creates a complete seal as the bullet exits the case and maintains that seal until it exits the barrel. This in turn increases accuracy by eliminating gas blow-by and decreasing copper fouling. In short, these bullets are supremely accurate and completely devastating on game animals.

One piece of clothing I find myself wearing on almost every hunt is the KUIU Peloton 200 Zip –T.

This piece is a great mid-layer. It’s very warm, and I wear it a lot as my outer shirt, sometimes alone, sometimes under a vest. To me, it is like a super-lightweight half-zip sweatshirt. The 200 Zip-T is incredibly comfortable with its soft fleece inside, warmth to weight is unbelievable, it breathes, is quiet, easy on and off, and looks great. Unless temps are pretty high during a hunt, I’m wearing it.

The 200 Zip-T is made of Toray Karuishi fleece, which has a special brushed fabrication that traps warm air inside the fabric. The hydrophobic nature of the fabric wicks moisture away from your skin, so it can quickly evaporate, keeping you dry. The Zip-T design enables you to keep warm in cold conditions, and release heat with the half-zip collar as conditions change. Odor-causing bacteria is blocked from penetrating the fabric because of an odor-control treatment, allowing for extended wear.

The garment comes in both KUIU’s camo patterns and a couple of solids (above). I hunt in the camo and wear the solid around town as a casual piece because it is just so darn light and comfortable. KUIU really hit a home run with this one.