Open or concealed carry for everyday, which is right for you?

Open or concealed carry for everyday, which is right for you?

Recently the 9th Circuit Court of Appeals ruled that open carry outside the home is protected under the Second Amendment. What a victory for gun owners when the liberal 9th Circuit came through with this decision. Folks might be surprised that as a veteran law enforcement officer of 30 years I applaud good citizens carrying a firearm on a daily basis. However, when it comes to a decision to carry openly or concealed, I prefer to keep my sidearm concealed. On occasion I carry openly, mostly in remote location or on the firing range when instructing. Of course there are states where open carry in public is prohibited no matter what or where concealed carry permits are only given to a select few of the very “special and privileged folk”.

Many ask why it necessary to have a license to carry concealed at all. Well, ask your state legislatures. In New Mexico for example, state criminal code specifically makes it a crime to carry a loaded concealed firearm…except for a licensed concealed carry holder. New Mexico does not prohibit open carry for a citizen that is legal to own or possess firearm in the first place.

There are some advantages to open carry. Perhaps you live in a state where concealed carry is not legal in which case open carry may be your only choice. However, as a general rule I believe you are better served carrying your handgun concealed. My logic and reasons for preferring concealed carry are outlined below; 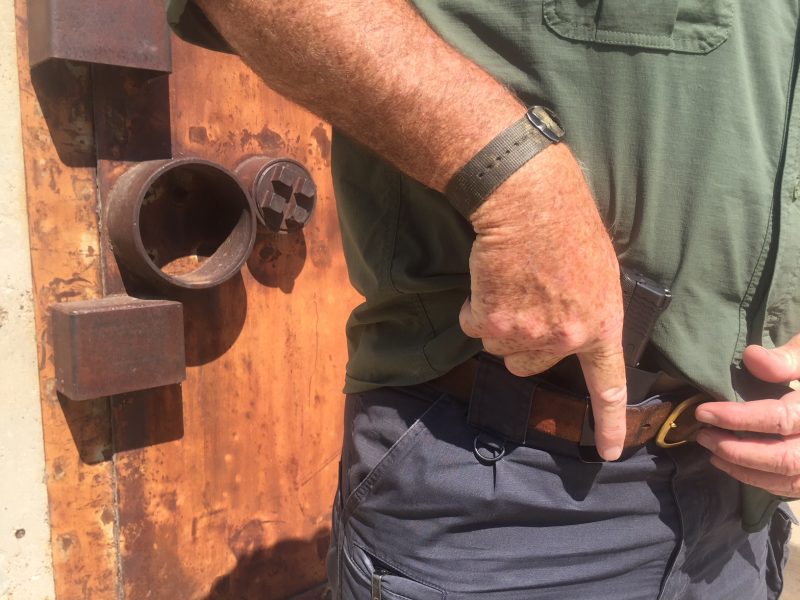 I generally choose to NOT let everyone around me know that I am carrying a pistol. No need to advertise one’s armed status to the world. As you will find in the following discussion, keeping the tactical advantage by not letting those around you see your firearm may well be to your advantage. By carrying concealed you are not causing upheaval because you are a “person” with a gun. The general populations, who don’t believe in taking responsibility for their own personal protection, immediately believe you’re a demented person whose intent is evil. I believe you are best served by blending in, being quiet about it and having some consideration for those who just don’t get it and never will!

Realize that not all criminals will burst through the door and begin shooting. Some are very observant, calculating and cunning. This could play out two ways for you. By carrying concealed, your ability is well-hidden and may in fact give you time to take cover before any exchange of gunfire, or better yet keep the element of surprise. In the case of carrying open you may unfortunately be the criminals’ or terrorists’ first target. On the flip side, your open carry sidearm may dissuade the attack to begin with. Personally, I would rather maintain quiet and tactical advantage and not be the immediate focus of the punks’ ill intent. Admittedly concealed carry does require additional training in methods of drawing your hand gun and concealment. So train, solid training should not be compromised.

A waste of law enforcement’s time

There are too many YouTube videos showing confrontations between open carriers and law enforcement.  I get it; many officers don’t understand the legalities of carrying open. Please understand that law enforcement is required to respond when that call comes in of a “man with a gun.” Arriving officers don’t have a clue many times as to the circumstances, and therefore need to be cautious in their approach. Why waste the officer’s time in the first place? Stay discreet in your carry and avoid problems for yourself and police. They have better things to do than to have a discussion face to face with someone openly carrying.

Self-examination of motives for open carry, and drawing the attention of police, should be a priority for all that elect this option. Is your aim is to educate? Then a non-confrontational approach will more likely result in an officer’s willingness to listen with an open mind. If your reason is more ego and about drawing attention to yourself then the outcome may not be in your favor. Unfortunately, the resulting negative assumptions are often placed on all gun owners.

A consideration for the general public

More and more of the general public today get downright upset when they see a gun being openly carried. As someone who is proactive in their right of self-defense should you care? I believe you should. Being intimidated, frightened, or just plain offended are common responses. Unless you live in a community where open carry is readily accepted and practiced (and there are many), you’re asking for trouble. The sad facts are folks today are, indoctrinated that guns are evil and therefore those that carry them are also evil. Gun owners all know that gun rights are generally under attack by individual states in many cases as much or more than the federal government. It’s an uphill battle; perhaps we should all choose our battles carefully. I want to retain my ability to carry concealed than risking possibly losing it all. Of course much of this depends on where you are standing at any given moment in the country.

A discouragement of more restrictions

The current status of open and concealed carry is a never ending fight at every level of government. We already see it, California, New York, New Jersey, Connecticut, Hawaii, and Washington to mention a few. Gun legislation aimed at restricting the everyday law abiding citizen, the patriot, and folks like you that choose not to be a victim and know police cannot get there quick enough. The unfortunate fact is that where you are sitting geographically in the country is what influences how big an issue you have ahead of you concerning both concealed carry and open carry. Too many times in recent months we have seen private business post their property against firearms, open or concealed because of controversies surrounding the issue. Proceed with caution, most folks that see open carry today start to complain and that leads to more regulation.

Do not interpret my meaning here as anti-open carry, although my preference is for concealed. My only goal is to give some thoughts relevant to the world we live in today. Having had a long career dealing with such issues I elect to be quiet and professional in my everyday carry.

James Monroe the 5th president of the United States perhaps said it best… “The right of self-defense never ceases. It is among the most sacred, and alike necessary to nations and individuals.”  I totally agree.