If there’s one weapon that the movie character of John Rambo is associated with the most, it’s the large survival knife with the serrated blade.

This general type of knife has rightfully become a classic in its own right, but what many people don’t realize is:

A. The knife was originally unique to the films, and

B. Rambo actually used a different knife in each film

The handle of the knife is hollow, which is both a blessing and a curse.  On one hand, the hollow handle means that survival items can be stored inside of the knife, such as a fishing line, a fishing hook, matches, compass, and so on.

But on the other end of the spectrum, this also means that the knife lacks a full tang, so it’s not as durable as a comparable knife with a full tang.  This isn’t to say that the knife is going to break or crack after minimal use, but it is to say that it may not be the best suited for heavy duty work (such as chopping through logs, for instance).

Many people believe that the ‘Rambo survival knife’ or any other similar knife is utterly ridiculous and that such a large knife is not truly necessary for survival and outdoor uses.

But in reality, these knives have many uses, and even though they may be big and cumbersome for some uses and not well-suited for more precise work that you would need a smaller knife for, the truth is that a Rambo survival knife can be an invaluable asset to any personal survival kit, car survival kit, hunting pack, or bug out bag for these reasons: 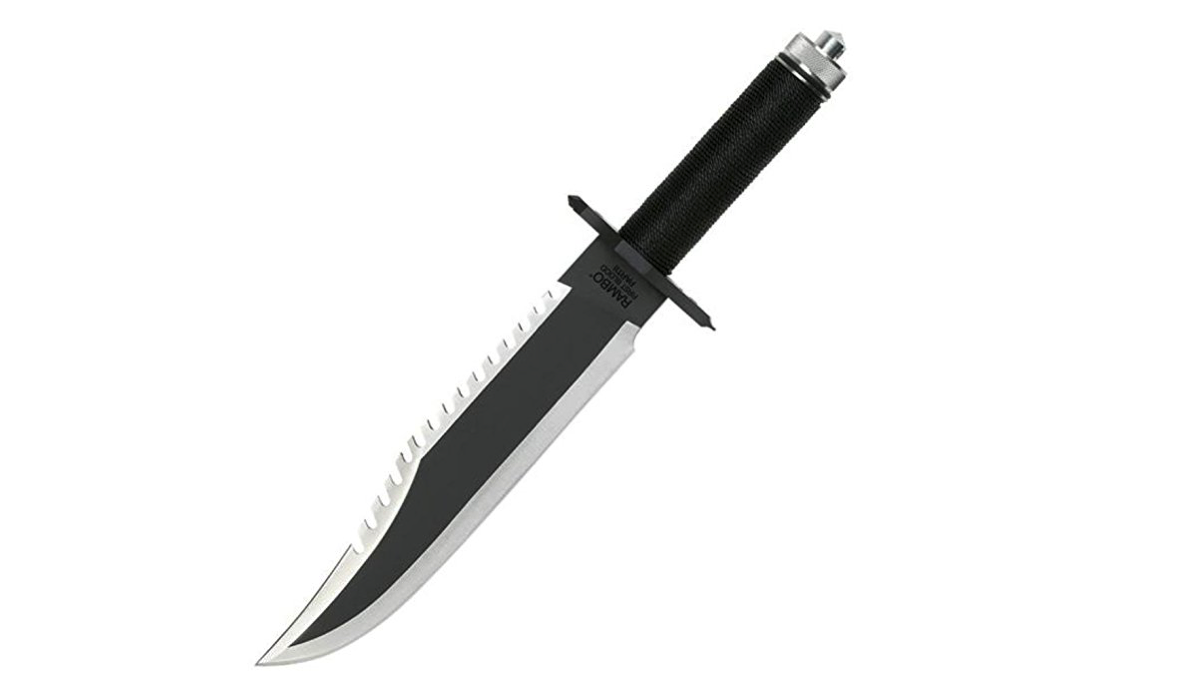 Multiple times, Rambo uses his knife as a spear by lashing it onto the end of a pole with paracord.  This provides the user with much longer reach, and while you could do the same with any smaller knife, the simple fact of the matter is that the spear is going to be much more effective with a longer blade.

A knife spear is actually a valuable hunting weapon if you can get within close range.  In First Blood, Rambo uses his knife spear to kill an unsuspecting wild hog. 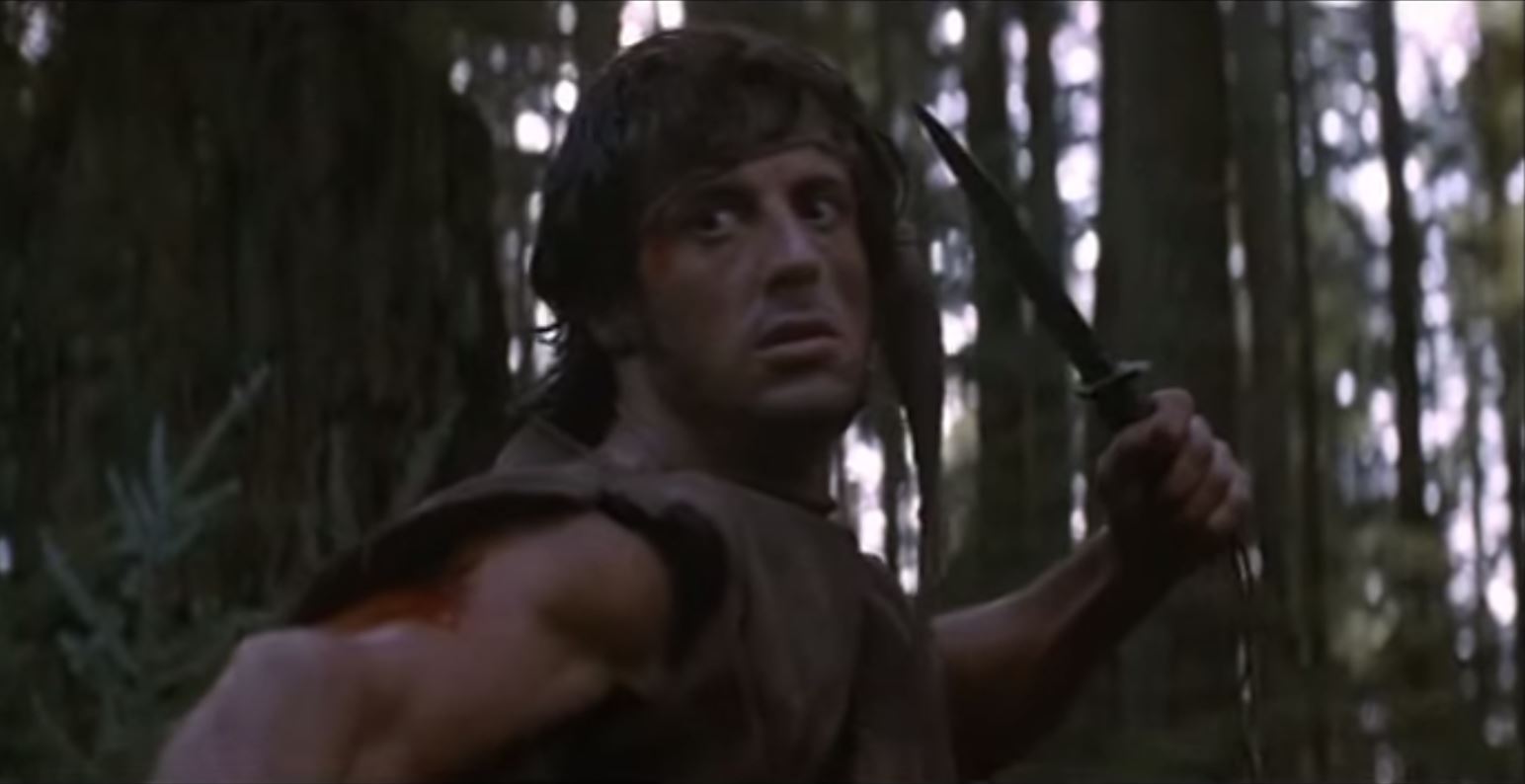 All the same, a knife spear would be a great weapon to use for defense against both people and wild aggressive animals thanks to its longer reach.  But even without the spear factor of things, the knife itself can still be used for defense, and a longer blade would be more preferable for the purpose over a smaller one.

The serrated blade on the Rambo survival knife makes it very valuable for sawing through wood, which you can then use for a multitude of purposes from damming up a stream to catch fish to shelter building to setting traps and snares to fire wood and so on.

The knife can also be used for splitting wood by pressing the sharp edge of the blade against the middle of the end of a log and then whacking the back part of the blade with another piece of wood to split the log.  It’s the next most effective way to create firewood besides using a splitting maul or axe of some kind. 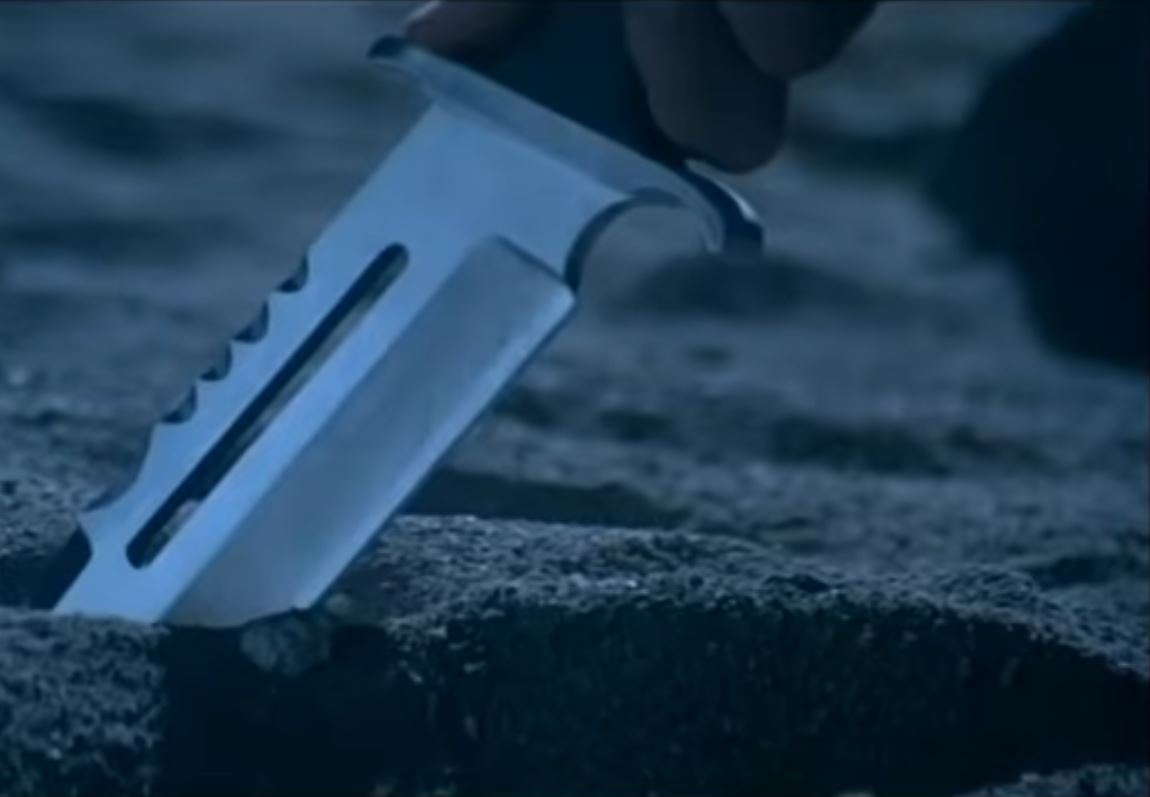 This is perhaps one of the most overlooked uses for the Rambo survival knife in general, or any other large type of knife for that matter.  You may need to dig holes and trenches to catch wild game or insects, to build a latrine, for shelter, or anything else. If you don’t have a shovel, a large survival knife really is the next best option.

If you sustain an open wound and need to cauterize it to prevent infection, you can heat the blade of the knife over the fire and then press it over the site of the wound. It will hurt like hell, but it will help prevent a deadly infection that could have otherwise made the situation worse.

As you can see, there are many uses for a Rambo-style survival knife.  By all means, bring a smaller pocket knife with you as well, but a larger knife will still serve its purpose well for you.