History of Evinrude: All for a Scoop of Ice Cream and Clean Air

History of Evinrude: All for a Scoop of Ice Cream and Clean Air

The Dawn of the 20th Century saw technological advances intent on making life more leisurely wherever possible.  This was largely thanks to the advances in internal combustion engine designs which provided new impetus in machinery and industry as steam power gave way to gasoline.  The intent was to provide bigger, better, stronger, and throughout the century these intentions were met, yet with a growing cost to the natural world.

Evinrude Outboard Motors was inspired by a simpler intention: Ole Evinrude, born 1877 in Norway emigrated to the United States in 1882.  By 1893 he was working as an apprentice machinist.  Sometime around 1905 he began a courtship with Bess Carey.  One summer afternoon the two were picnicking on Okauchee Lake, Wisconsin.  At some point Bess expressed a desire for some ice cream.  In the evident and vigorous flush of youthful affection, Ole rowed to shore and back to complete the quest.  Though the ice cream had melted by the time of his return, the adventure inspired Ole to understandably forsake the paddle forever as a means of water propulsion.  It is not known if Bess chose to accept the melted ice cream, but she did accept Ole, marrying him in 1906.  His first motor design was produced in 1907. 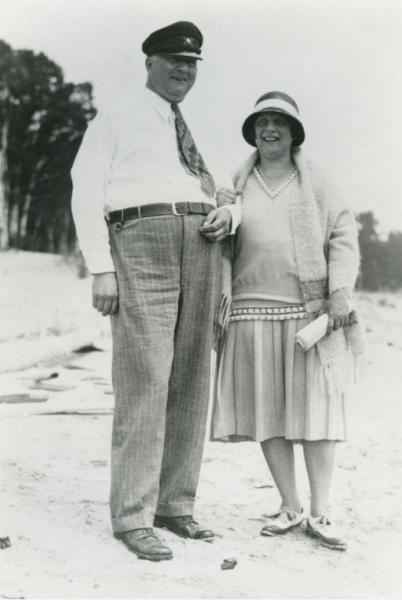 Outboard boat motors were a natural extension to the invention of the gas combustion engine.  The first recognized commercially available motor was built by Cameron B. Waterman in 1906.  Twenty-five of his air-cooled motors were sold that year inspiring a water-cooled design the following year with successive units and rights under Arrow Motor and Machine Co of Newark N.J after 1915. 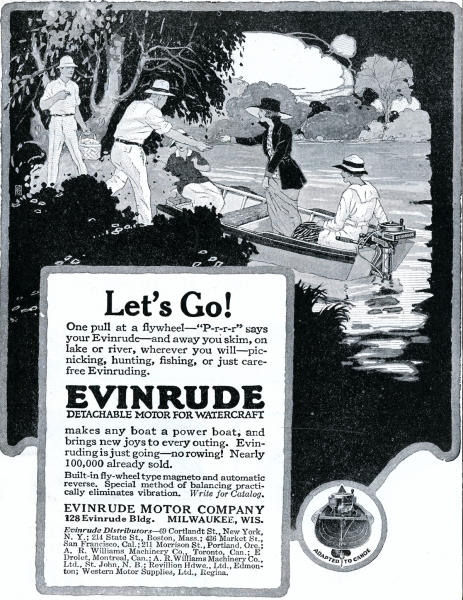 Back in 1907 the prenatal Evinrude Motors was founded in Milwaukee with Ole’s prototype outboards as a model to be clamped onto the back of a boat made commercially available in 1909.  These were introduced by the rebranded Evinrude Detachable Rowboat Company that year.  It was a sixty-five-pound, water cooled, 1.5 horsepower, single cylinder motor and it was an immediate success. 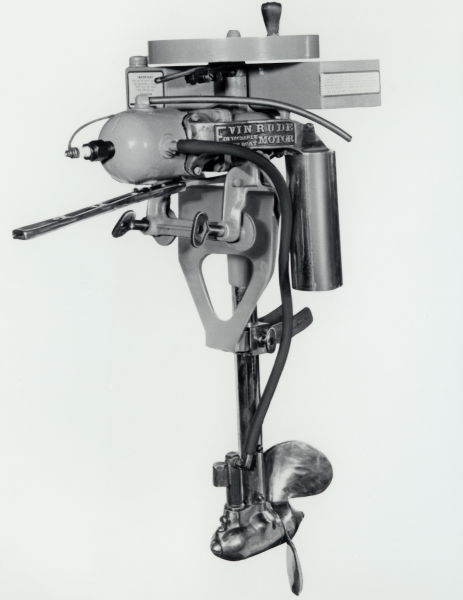 This was the birth of the Evinrude brand.  The company experienced a steady demand for its premier product because of its reliability and it was one of the first brands onto the market.  What further helped set it apart was that it was one of the first that vented its exhaust underwater to be quieter.  The company’s success was also thanks in no small part to the business acumen and advertising expertise of Bess.  One cannot but hope that she ultimately got her dish of ice cream.

The working relationship between husband and wife was successful: Ole focused upon the engineering and technological aspects while his wife focused upon the bookkeeping and marketing.  By 1911 the company formed a partnership with tugboat magnate Chris Meyer, opening up further avenues of demand and capital.  Yet Bess’s good health was evasive leading the couple to seek an extended vacation.  It was to Meyer whom Ole sold his half of the company’s interest in 1913 for $137,000 when Bess’s health took a turn for the worse.  Ole refused to refer to this as an early retirement, pledging only to take a five-year hiatus.  Though he stepped away from manufacturing he never stopped exploring new designs.

Upon his return in 1919 he manufactured a two-cylinder, three horsepower aluminum motor that weighed only 48 pounds.  Delivering twice as much power for reduced weight, it was an instant success.  Evinrude motors continued to be prized for their dependable durability as well as for their innovation. 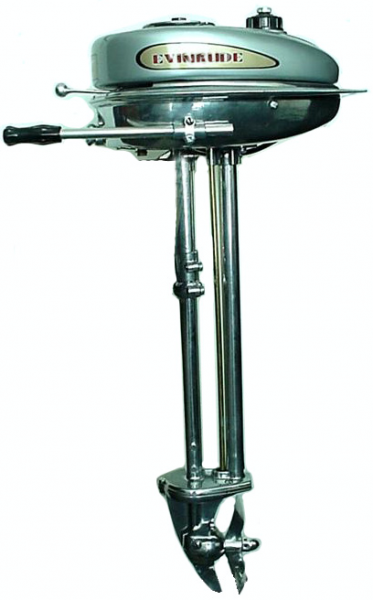 To maintain forward momentum and assumedly a controlling interest, the Evinrude Light Twin Outboard (ELTO) Motor Company was founded in 1920 as a separate entity from the original Evinrude Motors that was sold to Meyer.  In a further attempt to mitigate confusion, Meyer rechristened his company in the meantime to the Outboard Motor Company (OMC).  The Ole and Bess partnership never wavered as he continued fine tuning ideas and she maintained the books.  Unfortunately, her health never returned to full strength.

Bess retired in 1928 ending the business partnership, but not the personal one as Ole planned to retire with a bit more permanence this time, leaving his son Ralph in charge.  Briggs & Stratton bought ELTO, ultimately combining it with others including OMC, Lockwood Motor Company and another Milwaukee manufacturer – Johnson Motor Company (JMC) formed in 1921 by brothers Hugh, Larry and Clarence.  This merger eventually operated under the collective name of OMC in 1935.  The Evinrude label would survive on the cowlings of the motors, however.  Unfortunately, Bess did not long enjoy retirement, passing away in 1933 with Ole swiftly following her in 1934.

Under Ralph Evinrude however, the company did not lose its spirit for ingenuity.  Throughout the rest of the 1930’s, despite the Depression, OMC developed the 4 to 60 horsepower engines, which were designed for midget boat racing.  Comparatively lightweight – eighty pounds being the largest, but delivering an equal number of horsepower, they ran on a special alcohol-based fuel.  These developments left the company in a respectable position for earning government contracts for building motors and watercraft during World War II. 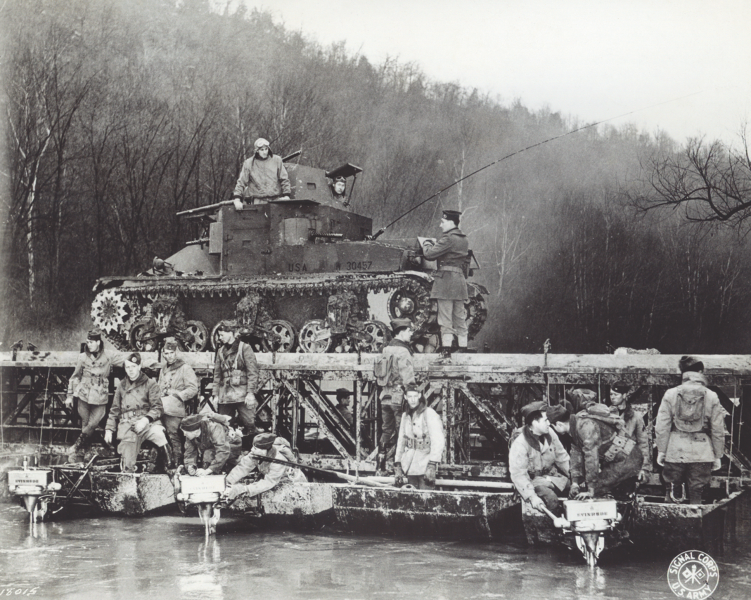 After the War, OMC returned to recreational outboards with the introduction of JMC’s Sea Horse QD Model: almost all modern features including recoil starter, removable motor cowl, forward, neutral and reverse gears and a remote fuel tank.  OMC maintained a strong position in the industry and in 1960 began assembling Evinrude and Johnson motors in Australia. 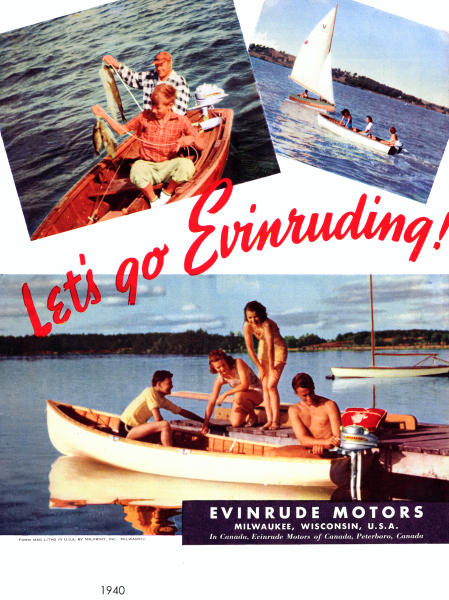 Up to that point “Down under” labored under strict import restrictions with few native makes and even fewer English or Swedish models allowed in.  OMC’s permission led to success in that country on the other side of the world.  It also inspired stiff competition from what became globally recognized names: Yamaha, Mercury, Honda, , Mariner and Suzuki.

As more people began enjoying waterborne sports and leisure activity, the effects on the environment became more apparent.  Some of it was simple careless use of fuel and spills into waterways, but the bulk of the culpability fell upon the engines themselves: 2 cycle motors required a gas and oil mixture for fuel which generates thicker, smokier exhaust.  Of course, many Evinrude models were exhausted under the water for sound control putting unburnt fuel directly into the waterways.  The 1970s and later saw an increasing number of laws, especially in the US at the direction of the Environmental Protection Agency.

The 1990’s saw environmental legislation that encouraged migration away from carburetors and many manufacturers moved to four stroke engines for cleaner exhaust.  OMC partnered with FICHT of Germany to develop direct injection fuel systems to conform to EPA regulations to protect air and water from petroleum pollutants.  Unfortunately, the first efforts struggled with durability: making a two-stroke motor that was small and efficient proved to create more problems than anticipated.  Meanwhile another round of environmental regulations raised standards further. 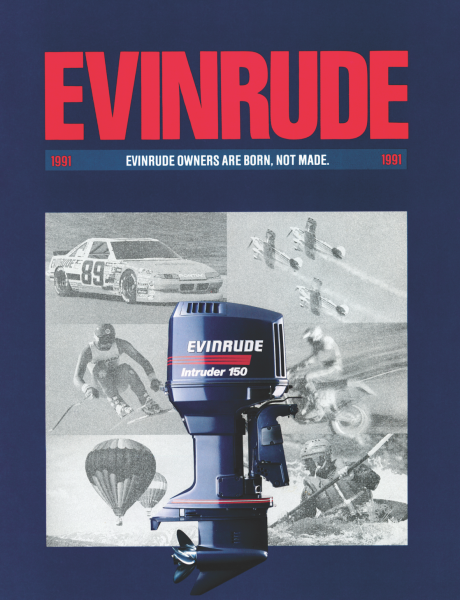 Simultaneously, US outboard motor makers faced competition from Japan which had begun with an eye on fuel efficiency, environmentally friendly and mechanical dependability.  The result was OMC was forced into filing Chapter 11 bankruptcy in 2000.

The Evinrude brand could have faced the same destiny of other early 20th century labels like Studebaker and Hudson but in 2001 Bombardier Recreational Products acquired Evinrude and Johnson, making them subsidiaries.

Ironically, what spelled financial burden, if not ruin, for many companies ultimately gave Evinrude a new shot at success.  EPA regulations on protections of air and water had forced Evinrude under OMC to a redesign that was rushed and unsuccessful.  Efforts to maintain original design set ups that were ill suited to notions of being self-contained were unsuccessful.  Under Bombardier leadership however, the FICHT technology was reincarnated into a revolutionary new design that became known as the E-TEC direct injection model.  Improved fuel efficiency led to better emissions.  A pinpoint oiling system reduces both oil usage as well as petroleum contamination to the environment.  A focus on reducing maintenance rebuilt the company’s reputation for reliability with their E-TEC motors.

The rebuild was an unqualified success.  The E-TEC was the first outboard engine ever to win the United States EPA’s 2004 Clean Air Excellence Award in recognition of its low emission levels.

Today Evinrude remains one of the most popular motors for maritime leisure craft as well as one of the few American manufacturing names, currently manufactured in Sturtevant, Wisconsin, that have lasted over a century.  In fact, this is their 110th anniversary and the company continues to maintain a standard of industry excellence.  The Ole Evinrude Award is presented annually by the New York Boat Show to individuals who are recognized for contributions in the growth of recreational boating. 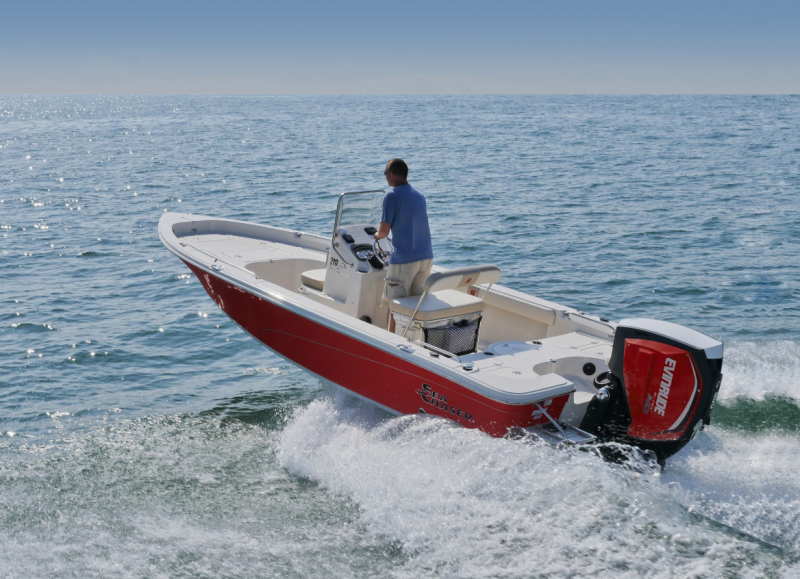 Naturalists, outdoor enthusiasts and conservatism has become intractably linked, after all, without places to enjoy nature there are no outdoors to enjoy.  While Evinrude’s redesign was ultimately motivated to meet federal regulations, the end result is to maintain and protect our environment so future generations can enjoy the rivers and lakes.  That has become a hallmark of the Evinrude brand: delivering reliable, efficient and environmentally responsible engines for generations.