Everything You Need to Know About Buying a Small Boat Engine

Everything You Need to Know About Buying a Small Boat Engine

Going on the hunt for a new small boat engine may seem like a daunting process when first getting started. There’s a wide variety of reputable brands offering variations of engines which each have distinct pros and cons. It’s likely been a while since you’ve been in this marketplace if you took care of your old engine and a lot has changed with new modern technology. While the engine choices available to a buyer have exploded in the past 20 years, the quality of new options have also increased exponentially.

What is the Primary Purpose of Your Boat?

Are you planning to use your boat for fishing, or for water sports such as wakeboarding, skiing, and tubing? The power required to move a fishing boat across a river or lake will be much less than if you are planning to use your boat for watersports. If you have an inflatable boat or a lightweight aluminum boat that you only plan to fish with, an electric motor could be all that you require.

While it may technically be possible to pull a lightweight skier with an electric motor, you will undoubtedly need to step up to a combustion engine if watersports are in your boat’s future.

If you’re in the market for a larger combustion engine, your main choices come down a two-stroke or a four-stroke motor. Traditionally, the choice between a two-stroke and a four-stroke was clearly defined. Two-stroke engines provided a lightweight option with a superior hole-shot to quickly propel a boat onto the plane of the water. On the downside, they were also noisy, had poor fuel efficiency, and would create a large cloud of fumes as you rumbled across the water. Four-strokes, conversely, are bigger, quieter, more fuel efficient and cleaner for the environment.

New technology, however, has erased preconceived notions about the operation of these engines. Below we’ll look at the traditional differences between the two types of combustion engines and introduce you to the modern versions. Making distinctions between these two motors used to be easy, but advanced technology has almost completely blurred the lines between a two-stroke and a four-stroke engine.

What is a Stroke in an Engine?

So, what exactly is a stroke? In the engine is a cylinder containing a piston which moves up and down. Each piston movement is referred to as a stroke. The piston first moves down the cylinder to allow air into the combustion chamber and then jumps back up to compresses the fuel and gasses. A sparkplug then delivers the juice for the combustion, and the piston moves back up the cylinder to expel the exhaust.

When the world was introduced to direct fuel injection motors, the game was changed completely. The reason that a traditional two-stroke engine was less fuel efficient than the four-stroke was that during the sequence in which the oil-gas mixture was fed into the cylinder, the exhaust valve was opened and around 30 percent of the fuel would escape. With a modern DFI engine, the fuel is supplied at the precise moment that the piston is covering the exhaust valve, leading to far superior fuel economy.

Modern DFI two-strokes have improved upon traditional 2-stroke engines in every facet you can imagine. While traditional two-strokes can still be found on secondary markets, beyond budgetary constrictions, you will be universally better off with a newer DFI engine compared to the older iterations.

A four-stroke motor has many advantages over its smaller two-stroke cousin. Until the age of DFI two-strokes, a four-stroke was considered a more modern engine. A computer system manages the inner workings of the engine and ensures that everything is working correctly. There is also no need to mix oil and fuel to keep a four-stroke lubricated as it stores oil in a separate compartment.  The four strokes involved are intake of air, compression of fuel, power from combustion, and finally exhaust.

Traditionally, a four-stroke motor had the two-stroke beaten in most areas, but weight is one area where the smaller engine will always win. Weight is, of course, an incredibly important factor to consider when buying a new engine. If you have a smaller boat, a four-stroke may be too cumbersome for your needs. There is also the expense to consider. If you’re on a budget and have a smaller boat, a two-stroke may work perfectly for you. Keep in mind that even with a modern DFI, you will still be producing more emissions with a two-stroke versus a four.

A DFI two-stroke motor has excellent torque, responding quickly as soon as you throttle it up. This makes a DFI two-stroke ideal for pulling a skier, wakeboarder or tuber. The quick response is less of an advantage if your boat is primarily used for fishing, but a quick hole-shot remains an advantage that any fisherman will be happy to utilize when hurrying to the next honey-hole.

A hole-shot is how quickly a boat gets onto the plane of the water. When idling, boats sit in a “hole” created by the displaced water around the boat. When throttling up the engine, the hole-shot describes how fast the boat can get out of its hole and on top of the water.

Fuel economy and emissions is another area where the gap between the two engine types has been shortened by new technology. However, a four-stroke engine still remains more fuel efficient and produces fewer emissions than a two-stroke.

A four-stroke engine is also the clear winner in this department. Oil maintenance in four-strokes is just like changing the oil in your car. You will likely need to change the oil once per year, making oil maintenance a fixed cost that is relatively hassle free.

Two-strokes, on the other hand, require oil to be mixed with the fuel. The oil mixture was previously a more labor-intensive process that required you to combine the fuel yourself. Modern two-strokes will do the mixing for you, and all that is needed by you is to fill up the oil reservoir on your engine.

While more convenient than it used to be, the cost is still much higher to maintain a two-stroke engine compared to the annual oil change on a four-stroke. The necessary oil starts at around $40 per gallon and requires a 100:1 oil-to-fuel ratio.

A four-stroke engine has multiple advantages over a two-stroke in the department of durability. For starters, the inner operations of a four-stroke engine are continuously lubricated by oil. The consistent lubrication keeps parts running smoothly, and acts as a cooling agent that helps to ensure that the engine doesn’t get overheated.

Modern four-stroke engines evolved from car engines that have been perfected over time with a long track record when it comes to reliability. Conversely, modern two-stroke engines are relatively untested in this department, and their lifespan is more of a question mark.

How do Electric Engines Compare to Combustion Engines?

For smaller boats, you may not need to mess around with the bulk or upkeep of combustion motors and instead can choose to go with an electric alternative. Or, perhaps you want to use the greenest option possible. In that case, the choice is clear as electric motors produce zero emissions. If you have a small fishing boat and don’t plan to be out all day, an electric engine may be an excellent option. 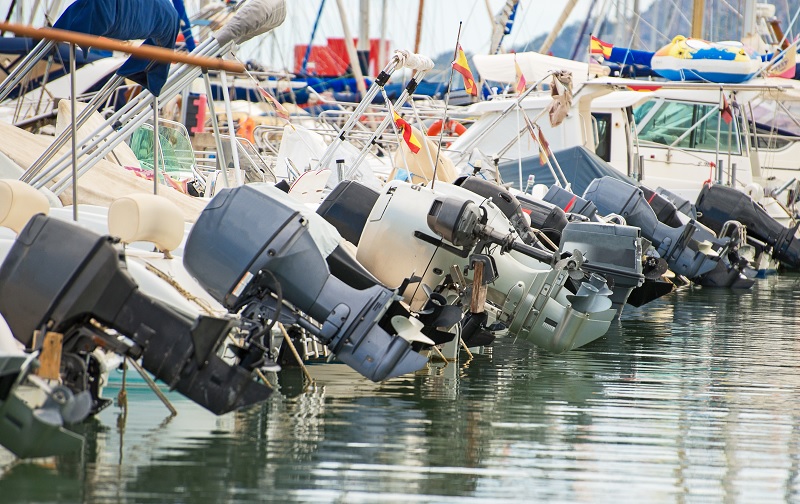 However, if you’re planning on using your boat for water sports, an electric motor will most likely not be powerful enough to get the job done.

How to Pick an Electric Motor

Consider the following criteria when initially searching for an electric motor:

How Much Horsepower Do I Need for My Boat?

The first place to look for this answer is on the owner’s manual, or on your boat’s capacity plate. Here the manufacturer will show a maximum horsepower depending on the size of your boat. On boats with a steering wheel, the capacity plate should be found near the wheel. If not, the plate should be located inside the transom. If you can’t find either of these, your owner’s manual is likely available online.

A general rule of thumb is that for each horsepower, you can have between 25 and 40 pounds of weight on the boat. Another general rule is that you should take advantage of as much horsepower as your boat will allow. While you may be able to get away with pulling a lightweight skier using 35 horsepower on a smaller boat, your engine will have to work harder and will be less fuel efficient.

When it comes to the minimum horsepower, first consider the horsepower-to-weight ratio. This will be the weight of your boat, and it’s engine, gear, and passengers, divided by the horsepower of your engine.

The most significant determining factor for how much horsepower is needed will be the use of the boat. If used for watersports, you’ll have to consider the extra gear brought on board, such as skis or wakeboards, as well as the weight of the people you’re pulling. You also must again consider how many passengers will be on the boat.

The final factor to consider with your boat and the amount of horsepower you will be using is your boat insurance. Your boat’s horsepower will affect the premium cost, the type of policy, and the overall coverage of your insurance.

If your boat is currently insured, before buying a new motor make sure that your boat’s maximum horsepower lines up with the horsepower of the new motor. Otherwise, your insurance may no longer cover your boat.

Boats with a higher horsepower will typically lead to a higher premium cost in your insurance. Additionally, the size of the boat you have will affect the type of policy you can expect for coverage.

There are many different factors to consider when searching for a new engine for your boat. Luckily for you, there has never been a better time to be in the market for a new engine.

If your small boat requires nothing more than an electric engine, all you need to worry about is finding the best batteries to power it up and away you’ll go without ongoing maintenance or pollution to the environment.

If you have a slightly larger boat or plan to use your boat for watersports, you really can’t go wrong with either a DFI two-stroke engine, or a larger, quieter four-stroke counterpart. In the end, it all comes down to your budget, your personal preference, and the size of your boat. Whatever situation you’re in, rest assured that you’ll be able to find the perfect new engine to suit your boating desires.