Just prior to this year’s whitetail rut in the Midwest, I wrote an article titled, “Whitetail Bowhunters: Top 5 Blunders that Can Cost You a Big Buck.” Because 3 weeks have passed since then, I thought it appropriate to provide a quick update on my deer season, and what I’m seeing regarding the rut.

First, I’m happy to report that I shot a decent buck in South Dakota. On day No. 7 of a 9-day bowhunt, and after not seeing a single buck in person or on scouting cams that would push the 125 mark, I had this tall-tined 4×4 sneak in toward my doe decoy. My deke was facing away from me at only 15 yards; normally I’ll place her at 20 yards, but due to the severe cold (air temp of 5 degrees) and sustained 35-mph winds, I placed her closer. I knew I’d be shivering in the treestand, and I needed a big target in those challenging conditions. Thankfully, this 8-pointer swung in perfectly, I drew when he passed behind a big limb in my tree, and I sent a 125-grain Magnus Stinger Buzzcut into his lungs at a range of only 9 yards. He ran 70 yards and dropped within sight in about 5 seconds. It sure can happen fast in the deer woods!

This is one of those “in between” bucks. He might be a 3.5-year-old, but he could also be 2.5. Whatever the case, he’s not getting any older now. I was proud to take him, the hunt was exciting, and now I’ll turn my attention to predator control. I saw a few coyotes from my deer stands, and having a 243 Winchester in my hands instead of a bow will level the playing field.

As expected, early in my deer hunting vacation — November 4-10 — the bucks were chasing does, or bucks were traveling nose to the ground in search of doe scent. The buck I killed was doing the latter. I grunted with my voice to get his attention from 60 yards, and he came in to the doe decoy on a string.

As happens each year, the rut action shuts off like someone flipped a switch. Individual bucks begin tending a doe-in-heat, which means you’ll notice a dramatic decrease in the amount of overall deer travel during daylight hours. Bucks move only when their doe moves. The chasing, at least by older bucks, ended abruptly on my in-law’s South Dakota land (and neighboring properties) on November 11. Every decent buck I spotted was tending a doe on November 11 and 12. (Some hunters call this the “lockdown phase.”)

I was bowhunting SoDak with a good friend, and he’ll be back in the treestand November 18-19. Firearm season begins the morning of November 18, so he’s hoping that local deer hunters walking CRP fields, cattail sloughs and shelterbelts will push some deer into our river-bottom. Like I said, I’ll be sitting in the woods hoping to run into a coyote.

I expect that much of the tending will be over, and bigger bucks will once again be solo and searching for a doe-in-heat. Of course, their movement will now be affected by hunting pressure due to firearm season; it’ll be interesting.

Next week, I’ll let you know what we observe. Good luck hunting!

P.S. My two sons, Luke and Elliott, had nonresident youth licenses for South Dakota, which allowed them to tag an antlerless deer. Luke shot a small doe on the morning of November 4, and Elliott tagged a mature doe the following day (photos below). Both deer were killed on a half-acre food plot planted in Whitetail Institute Winter-Greens and Double Cross. Click here to learn more about my food plot, and see pics of it during the fall growing season. 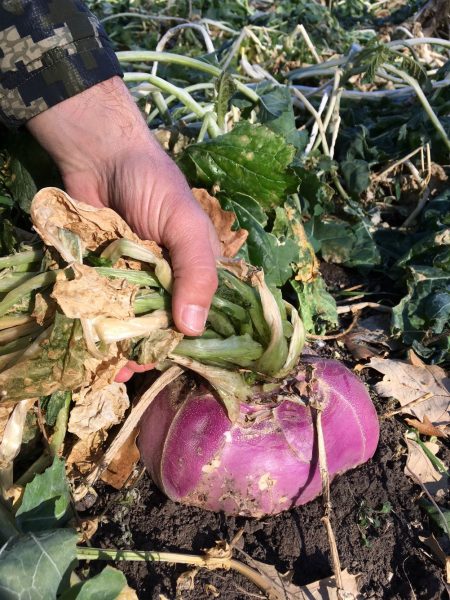