On New Year’s Eve, over 65 veterans and active duty military personnel gathered at Cathedral Park in Portland, Oregon, to end 2017 reeling in sturgeon on the Willamette River. The Fallen Outdoors organized the event with the help of volunteer guides and anglers running more than two dozen boats. 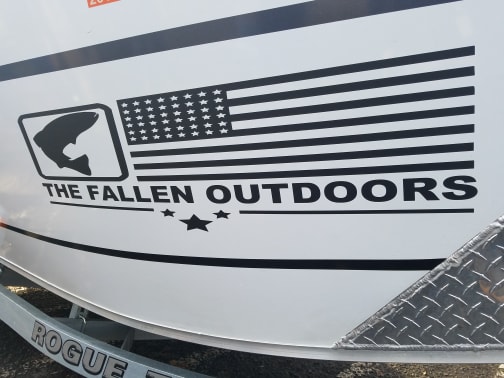 For a few of these veterans, this kind of fishing opportunity may not have been possible without the organization. Many of the participants drove several hours to meet at the ramp at 6 a.m.

Events such as this one happen in all 50 states as part of TFO’s mission to provide outdoor recreational opportunities for veterans. The organization has helped over 3,000 veterans become involved in the outdoors since 2009. Run exclusively by veterans, TFO coordinates with guides, landowners and everyday outdoorsmen and women to offer these events and trips as a way of saying thanks.

With military families moving from state to state to areas with unfamiliar surroundings, they often struggle with learning new fisheries and hunting opportunities. TFO aims to provide a collective of knowledge and the proper gear, as well as leadership and camaraderie. For this event, several sponsors donated items for a raffle, and film coverage was provided by Daniel Grossman of Steelhead Stalkers and Randy Tolle of Western Oregon Outdoors.

Jared Mikoleit, a veteran I met over the summer while covering a TFO archery event, hopped on board with me on Bradey Smith’s boat. Smith and his fishing buddy provided gear and bait, as well as their knowledge of the fishery, colorful conversation, and a few cold ones.

Many of the participants in this event had never caught a sturgeon before, including Mikoleit. It was a slow, very cold morning, but Smith was prepared with a propane heater I huddled next to as Jared was out on the back deck watching all four rods, waiting for a strike to happen. It took a while before the action began, but Jared eventually pulled in a sturgeon — then another, and another, and many more until we lost count.

Specialist Mikoleit served in the U.S. Army for 8 years, driving tanks in Iraq for the 1-12 Infantry from Fort Hood, Texas, and again in Afghanistan for the 4-23 Infantry from Fort Lewis, Washington. Today, he works at Seneca Sawmill in Eugene, Oregon.

Smith’s fishing buddy Matt Simmons, who goes by the nickname “Super Logger,” quickly connected with Mikoleit for obvious reasons. After a few hours of landing one fish after another, he began to share some war stories with us, and mentioned losing some close friends. On Sept. 24, 2009, another tank detonated an improvised explosive device that took the lives of Sgt. Smith, Spc. White, and Sgt. Reynolds.

“Living Our Dreams, Because They Gave up Theirs” is the motto of The Fallen Outdoors. Many of these adventures give veterans an opportunity to honor the memory of their friends and fellow soldiers by doing just that. Outdoor recreation also acts as a form of therapy for veterans that are coping with Post Traumatic Stress Disorder (PTSD).

A study by the Cleveland Clinic Journal of Medicine points out that veterans may be less likely to seek out help from a mental professional. Another study from the University of Essex explains that outdoor recreation, or “ecotherapy” benefits mental health and “reduces social isolation, aiding those with mental health issues to improve their physical health, gain confidence, and return to work.”

Introducing veterans to outdoor recreational activities such as hunting and fishing is effective because it’s more likely to be utilized by those who would be less likely to seek out other forms of therapy. In other words, veterans are more likely to say “yes” to an invitation to a hunting or fishing excursion than they are a counseling session on a couch.

As the surviving family member of a veteran suicide, the service that TFO provides is very personal and invaluable to me. Programs like this provide support to our troops when they return home and adjust to resuming their everyday American lives. It’s not just an effective form of therapy for younger veterans, either. The epidemic of PTSD is an ongoing struggle for veterans, many years after their service ends. A veteran commits suicide every 65 minutes in this country, and nearly 70 percent of them are over the age of 50.

You can also get involved by making a donation to The Fallen Outdoors, or joining their online community on Facebook. TFO facilitates outdoor recreational hunting and fishing opportunities for active duty and veterans of all branches of the military. To see coverage of TFO’s New Year’s Eve sturgeon fishing event, please subscribe to the Western Oregon Outdoors YouTube Channel.