Muskies are known as the “fish of 10,000 casts,” so we don’t know how that translates to ice fishing.

Suffice it to say that catching a muskie through the ice isn’t common, and this is the first time we’ve heard about an angler catching them back to back.

In the clip at the bottom of this page, you’ll see buddies Chuck Nordahl, Jayson Van Ert and Eric Peterson on the ice in pursuit of lake trout in Canada. But the group is surprised by not one, but two, muskies! 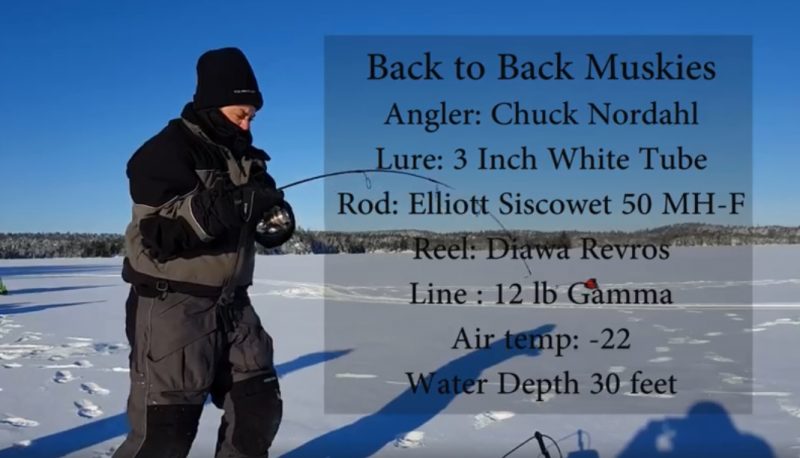 As the screen-shot above details, these guys are rigged up with rods, reels and terminal tackle to handle big fish, no matter if that means a muskie or a laker. And the conditions, while certainly picturesque, are downright brutal; the air temp is minus 22 degrees!

P.S. This isn’t the first time we featured a video on OutdoorHub showcasing the use of Elliott Fishing Rods. Click here to see an angry — and big — smallmouth walk on the water.

Enjoy the video (be sure to turn up the volume), and congrats Chuck on two beautiful muskies. Of course, both fish were quickly released so they can be caught again — hopefully this summer when it’s 100 degrees warmer!