There’s a New Frangible Load in Town, and Wow Does it Work – On Summer Produce!

There’s a New Frangible Load in Town, and Wow Does it Work – On Summer Produce!

A few choice samples of summertime produce were fatally harmed in the making of this article.

For those not already familiar with frangible ammunition, it refers to bullets made of compressed, powdered mineral(s). Depending on the materials used in the bullet, penetration of solid objects like wood, concrete block, and steel can vary. Its destruction of soft tissue targets is remarkable, as the extreme fragmentation usually creates both dramatic initial impact as well as multiple wound channels. Especially with modern hollow point frangible, those wound channels claim a much wider area than is achieved with traditional ammunition. Frangible rounds immediately disintegrate when fired into hardened, poured concrete or AR500-grade steel targets.

Telos brand frangible is made from pure copper. The bullets are designed as hollow points. Thus they deliver no lead downrange nor into the environment.

What’s counter-intuitive about frangible is its effect on pretty much any initial target other than steel and poured concrete. It is, in a word, devastating. I thought it’d be fun to send downrange some Telos 45 Long Colt, along with some Winchester ball ammo for comparison’s sake. And since paper targets can only deliver so much fun, I added some produce to the mix.

All testing was done from a supported prone position from 25 yards. The produce rested on a makeshift, but steady, table. The gun:  a beautiful color case hardened Big Boy carbine by Henry Repeating Arms, previously reviewed here on Outdoor Hub.

Before commencing with fruit-shooting, I compared the rounds on paper with three-shot groups. Winchester 250 grain ball ammo proved precise, with three shots placed about an inch into the seven-o’clock mark from point of aim. Telos, described on the box as “160 grain average,” with a factory-reported muzzle velocity of 975 feet per second. The Telos landed in a two-inch group, at six-o’clock from point of aim, a surprising 3.5 inches low—a bit counter-intuitive considering its lower grain weight.  I did not chronograph either load for this test. 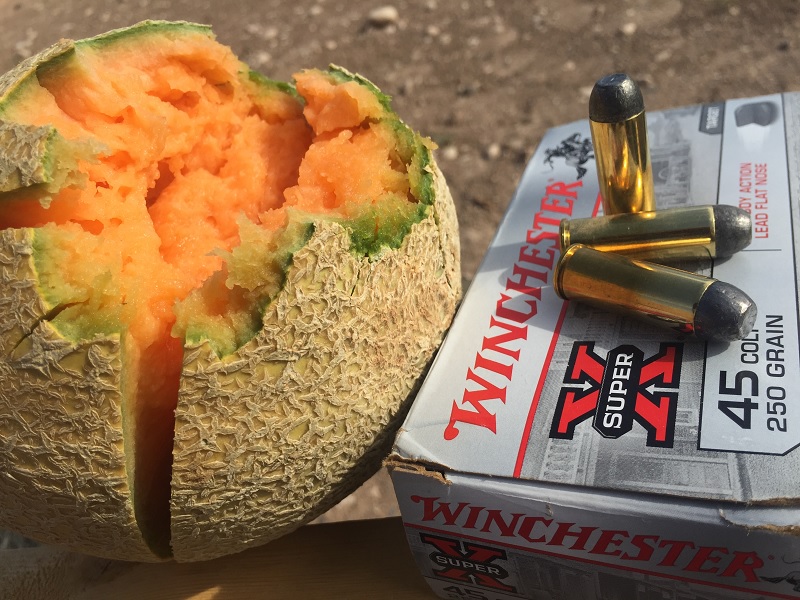 Winchester thoroughly cut an approximate 1/6 slice from the fruit, leaving the tissue in the round’s path quite scrambled and a single crack that nearly split it in half. Admittedly, this first hit was slightly off-center thanks to having to deal with a compensating hold.

Telos wasn’t nearly as polite. Seeds and juice soaked the table. In a six-foot radius behind the table lay the four recoverable chunks of what was left of Mr. Cantaloupe. 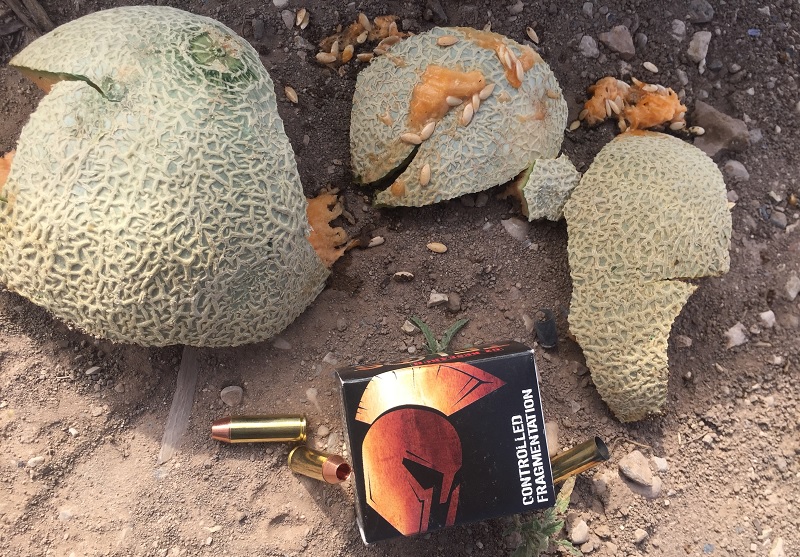 Each roundish melon was fired upon with the point of aim being the stem side. Winchester delivered a blow that resembled a decapitation; taking off the top third of the watermelon as a whole, leaving a couple deep cracks in the rind of the lower part and disrupting the “meat” of the entire fruit. 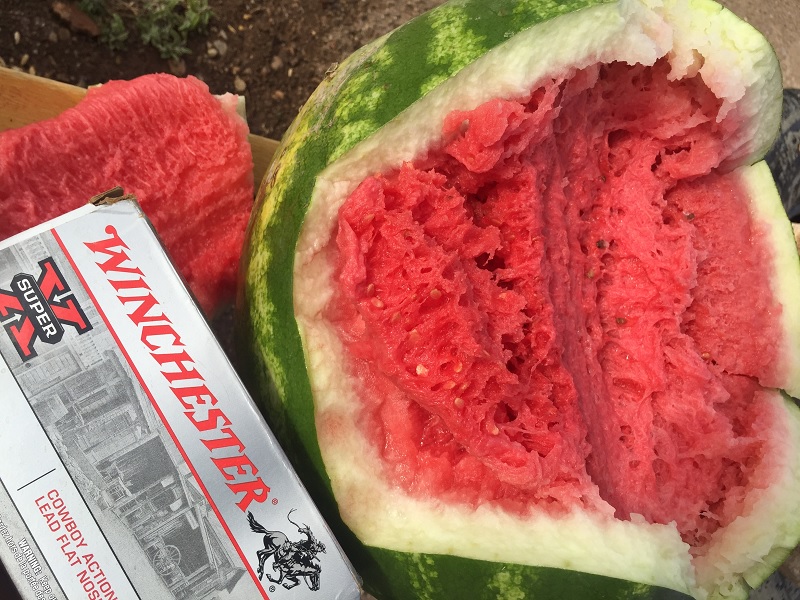 Impressive, yes, but Telos again did more. The frangible load blew the melon in an eight-foot radius, liquefying the meat of the largest of the four remnant chunks. Somebody tell the Waring blender people they have new competition. 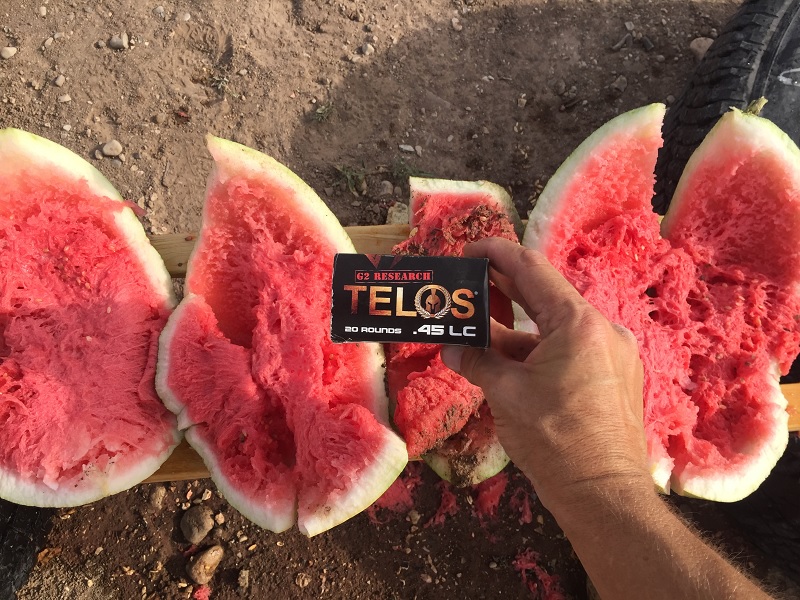 Saving The Best for Last: The Coconut Test

Winchester gave my sick sense of humor a chuckle with this one; When hit with the Winchester round, the coconut rolled off the table in what seemed like slow motion. And behind the table, our subject laid face-down in a pool of its own water. Upon turning it over, a grimaced expression was seen, its skin torn back in a crooked fracture with the flesh looking like teeth underneath. 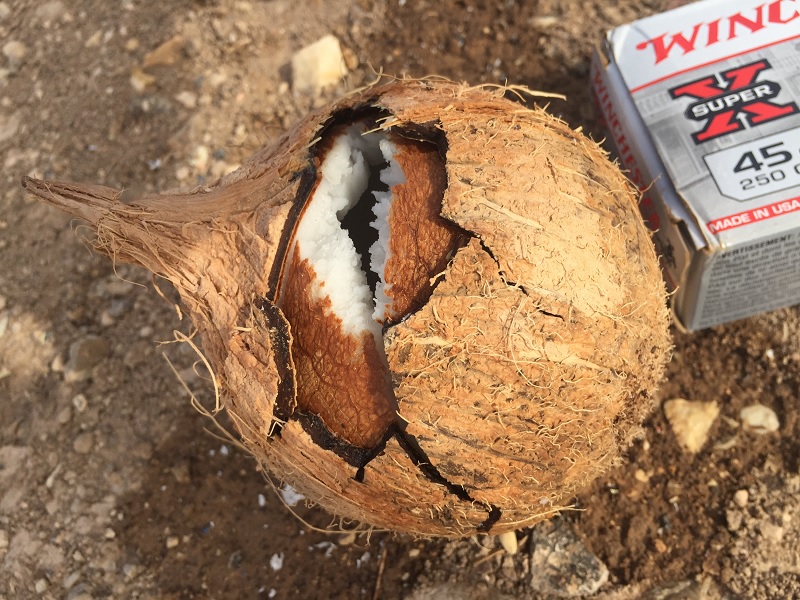 Telos—oh, Telos. Whereas the Winchester coconut fell lackadaisically to its demise, the Telos subject just disappeared. Upon closer inspection, I recovered four chunks, one even in front of the table it had rested on. The chunks were strewn in a 16-foot radius. Mightily impressive. 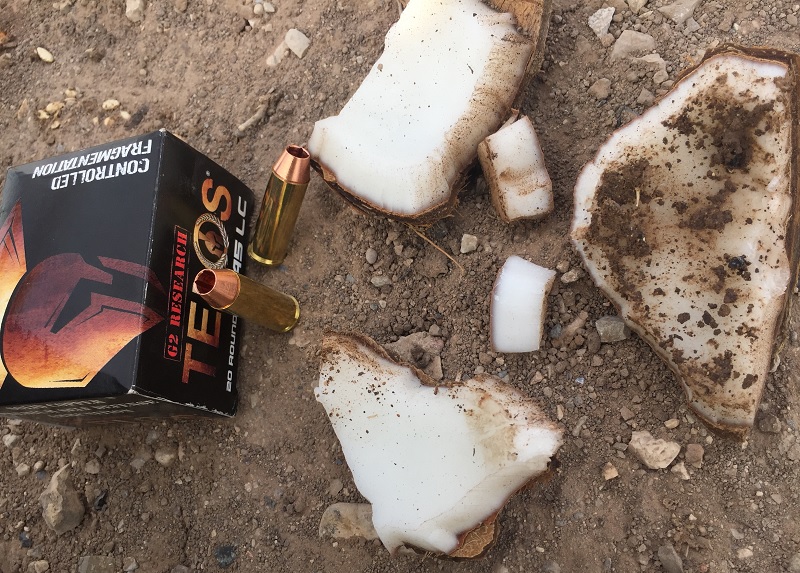 G2 Research Has Done it Again

Telos manufacturer G2 Research claims Telos is designed for a penetration depth of 10 or more inches, and has a spread of 3+ inches within the target—astonishing in comparison to the customary 150 percent expansion expected from traditional hollow points. They also promise seven different wound channels. This ammunition is listed on the company website as a handgun load, and certainly that’s where we most often see 45LC.  However, there’s no reason to hesitate to run it in a rifle or carbine as a defensive or close-range, medium game cartridge. While meat loss may be more compared to a traditional bullet, there’s no fear of lead contamination with Telos.

A student of frangible ammo performance will not be surprised by these performance standards. G2 Research established a reputation for high-performance defensive ammo with its original R.I.P. load. It appears that Telos is a continuation of that standard.

This amateur linguist had to research the meaning of the name. Telos has Latin roots. Its modern definition means “endgame” or “ultimate end.”  Pronunciation is either TELL-loss or TEE-loss.  Keenan: Please made sure italicization is preserved in posted copy. If that doesn’t work, quotation marks are ok. Thanks.

Telos ammunition is not exactly easy to find. But it can be found or ordered through numerous local dealers using the searchable map on the G2 Research website. As with any other high-quality defensive ammunition, expect to pay approximately $1 per round.