The next morning was Easter. My son Will was playing guitar at church, and he had to be there early for a sound check. So, my other son Drew and I decided we’d head into the field for an early hunt. We knew we had to leave by 8:30 a.m. to make the 45-minute drive home and be able to clean up and get to church on time.

I had seen a gobbler twice in a big hayfield on the opposite end of the farm Will and I started out on the morning before, and I already had a blind up. There was rain in the forecast, so I was happy to hunt from a blind anyway.

Before daylight, a bird gobbled at the other end of the field where I expected him to be, and soon after daylight, he walked out in the pasture and strutted all alone. He would answer most of my calls, but I had set my decoys in a spot in the dark where I don’t think he could see them, so he just hung out in the same area.

A thunder storm rolled in, and he gobbled his head off in the pouring rain, but he just wouldn’t move out of about a 50-yard area. I hadn’t heard another bird gobble on the roost, so I figured it was him or nothing, and the clock was ticking.

A hen finally came out and fed around the longbeard, and then she began working our way very slowly. I looked at my watch, and it was 8:10. I told Drew I didn’t think she would make it to us before we had to leave, because she was still 250 yards out and the gobbler was slowly trailing behind her by 50 yards.

The rain had stopped, and the sky was clearing, and it was the perfect time for turkeys to hit the fields to dry off and feed. I made another call, and something caught my eye from the opposite direction, and I saw a hen at 40 yards, then another, and another.

I was glassing the hens when a red head popped up behind them, just over the crest of the field. I called softly, and I saw the gobbler’s tail go up in strut, and he moved our way, but his path was keeping him over the hill. I began purring and clucking softly on a mouth call, and I saw the hens turn my way.

I told Drew to get ready, and when the tom strutted over the hill, he could see my strutting jake decoy, and he came on a fast walk, still in three-quarter strut. I told Drew I would stop him and to shoot if his head was up, but when I loudly cutt at the tom at 20 yards, he just gobbled in stride, and never slowed down. Drew whispered, “He is going to fight the decoy. I’ll shoot him there.”

That is just what happened. The gobbler ran in, slapped my decoy around and was standing on top of it at 14 yards when Drew finally sent his load of HEVI-13 6s on the way. It was 8:17 a.m., so we gathered our gear, snapped a couple quick photos, and just as we jumped in the truck, I got a text from Keith saying he had killed a 25 pounder from the blind we moved the evening before. After all that, we were 5 minutes early for Easter service at church!

Monday, the boys had school. The weather was cool and wet, but I went hunting anyway. I went to the area where Will and I started on opening day, hoping the other hunters only hunted the neighbor’s property on weekends. They weren’t there, but I didn’t hear a single bird on the roost.

I popped up a blind, set out some decoys and decided to just hang out a while and see what might happen. If I heard a bird somewhere, I intended to go after it, but if birds aren’t vocal, I hate just running around the woods. I feel like you bump and pressure a lot of turkeys, and that will hurt you in the long run.

I didn’t see or hear anything for a couple hours, and then midmorning, I saw three gobblers out in the field across the fence. They were just feeding, and they would barely even look up at my calls. After 30 minutes, they ended up about 150 yards from me standing on a big log, preening, but still across the fence. I knew if they walked on down the fence, there was a gap they could get through to come into my field, so I had hope.

About 10 minutes later, two jakes came over the ridge in the field with the gobblers, and the trio jumped off the log and chased the jakes all over, eventually going out of sight and away from me. I waited another hour in vain, so I decided to go get some work done.

I did note the direction the gobblers had originally come from, and it is a place I have killed birds before toward the back of the property. There is an old gate there and a nice gap in the fence, and the birds cross back and forth from the property I was on to the neighbor’s regularly. That is also the area I had heard one of the birds gobble from on the roost on opening morning.

The fourth morning of season, I went back out to hunt with Keith, and though he had seen two gobblers heading toward our favorite field the evening before, we didn’t hear anything off the roost. Three hens flew off the roost right to us, and we eventually saw seven hens through the morning, but we never heard or saw a gobbler on our property.

When my boys got home from school, I asked Will if he wanted to go hunting, and he jumped at the opportunity. We loaded up, and I told Will I wanted to go set up by the back gate on the farm where I had seen the three gobblers the day before.

It rained off and on the whole way over, and the radar looked like we might get really wet, so we packed a blind back to where I wanted to hunt. We got all set up with our decoys just a couple yards from the gap turkeys like to use in the fence, and I began calling on a slate call about every 10 minutes.

After a half-hour, I saw two hens headed our way from down in the woods. They walked up, looked at the decoys, and crossed the fence over into the pasture. Less than 2 minutes later, I saw a bunch of heads come over the hill out in the pasture, and it turned out to be three more hens and two jakes.

I called a little, the three hens ran straight to the two real hens feeding below them, while the two jakes came straight at us. They ducked through the gap in the fence, one puffed up for my strutting decoy, and then they went straight to my hen decoy. The dominant jake first tried to mount her, and when he slid off, he got mad and slapped her.

The hens stayed around for 30 minutes before moving off, and the jakes were within 60 yards of us for more than an hour. I continued to call occasionally, and the jakes would usually answer with clucks and an occasional course yelp.

An hour before roost time, I saw heads pop up over the rise in the pasture, and two longbeards came into view. I made one call, and they headed our way. The lead bird seemed a little timid, but the second one decided all was good, and he came trotting down the hill.

They crossed the fence gap just like the jakes, and I told Will to pick one out and count us down for a shot. He said he would shoot the lead bird, and then he whispered, “One, two, three . . . ” BOOM, BOOM!

I shot a millisecond after I heard Will’s gun report, and we had two big Kentucky toms on the ground. The HEVI-13 6s almost took their heads off at the close distance.

We had doubled again, and that tagged me and Will out for the season. What a great start to the season my family had, as we made a lot of special memories, and there will be turkey breast on the grill very soon. Whether Drew tags a second bird or not, we have had a great season, and it is one I will remember forever.

Not many people think a lot about optics for turkey hunting, but I think they are really important. I find a lot of birds with binoculars, and often I spot just a head or tip of tail fan over a hill or rise by glassing with my 10×42 Nikon Monarch HGs. They are ultra clear, and what I really love is that they give you full-sized binocular performance in a smaller package that is also quite light due to its magnesium alloy body. 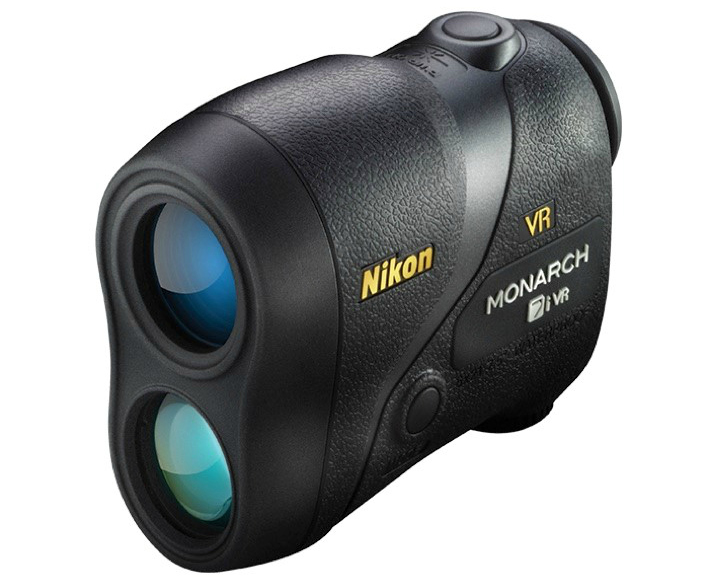 Most important to turkey hunting for me is a good reliable rangefinder. I want to know distances and limits for shots, and I would feel unprepared without my Nikon MONARCH 7i VR rangefinder when a gobbler steps out in a field. It provides distance readings from 8-1,000 yards. Readings are displayed in .1-yard increments, and thanks to Nikon’s HYPER READ technology, the measured distance is displayed with a fast, stable response, regardless of how far you are from the target.

It has a bright 6-power monocular that is clear even in low light for those birds just off the roost, and the vibration reduction is what really sets it apart. Nikon’s optical VR (Vibration Reduction) system, designed to reduce vibrations of the image in the viewfinder caused by hand movements (by approximately 80 percent) while simultaneously aligning the viewed image with the activated laser beam for faster, more precise ranging. I don’t know about you, but I get a little shaky when I am excited and have a big tom working my way! I don’t like guessing yardages, and this rangfinder has been fantastic, whether I was turkey hunting in Kentucky, or ibex hunting in Spain.