Saskatchewan – Where the Waterfowl Migration Begins

Saskatchewan – Where the Waterfowl Migration Begins

It was pitch black, with only the little area I could see in the headlights of the truck in front of me. I wore heavy layers as the temps were low, below freezing, but the Outfitter, Buddy Graham of Northway Outfitters, kept the truck comfortable on the long ride from the hotel to the field we were about to set up in. He stopped, hopped out to survey things and then came back and said, “It’s going to be a tough one,” before turning off the truck. I’ve been in some tough conditions before, so I wasn’t worried. I tried to open my door, but realized that I couldn’t, at least not very easily. Buddy laughed. “Yeah, it’s a little windy today.” 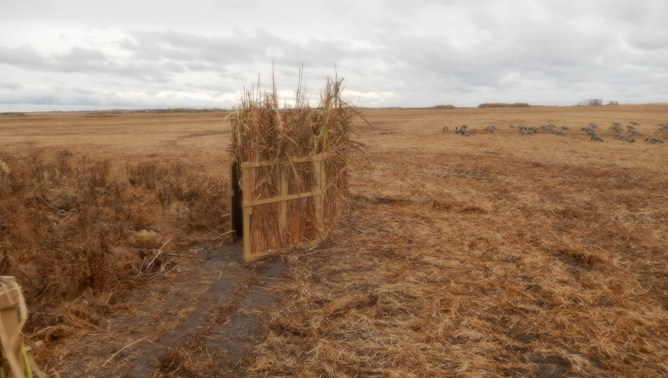 I almost missed the email, but luckily I caught it. It was an invite to do something I’ve dreamed of doing shortly after I started hunting waterfowl. Saskatchewan is a hunter’s paradise. Not only are their whitetails massive, but also the province serves as the first great opportunity to go at the massive waterfowl migrations for all the major flyways. It’s one thing to hunt in the southern regions as the birds reach their winter destinations. It’s a whole other ballgame to get at them before they are educated by every waterfowler down the flyway.

Simply put, this was going to be epic.

Several companies partnered to make my waterfowl dream hunt work. Okay, maybe it wasn’t just for me, but you’d never know by the way they treated me. Charlie Holder is the owner of Sure-Shot Game Calls out of Texas. I’ve known Charlie for a while now and not only is he a truly great guy, but also Sure-Shot calls work really well. Polaris RANGER also partnered with Charlie along with Vortex Optics, who supplied Diamondback HD 12×42 binos, Remington Firearms, Northway Outfitters and Tourism Saskatchewan to bring myself and few other lucky hunters for what was sure to be a great adventure. Along with hunting, we were going to have the opportunity to shoot Remington’s new V3 Waterfowl Pro shotgun and Hypersonic Steel Shot loads. We also got to do some driving in Polaris’ amazing new RANGER 1000 CREW. More on this machine in a future story.

Much like the Midwest in the U.S., the province is a main part of the World’s “bread belt,” growing massive amounts of grain. Different than the U.S., however, Saskatchewan’s growing season is shorter and later than the areas further south. During my visit in October, wheat harvest was tapering off. This meant lots of stubble fields with leftovers for the birds that were just leaving the breeding grounds to the North. The wheat fields are full of “potholes,” small ponds and slews that waterfowl gravitate toward. Add in stubble fields and massive amounts of birds, and you’ve got a playground that any waterfowler would love.

Buddy Graham’s Northway Outfitters may very well be the best known multi-species hunting operation in North America. If you ever look at Cabela’s old World’s Foremost Outfitters booking site, or catalog, and seen the massive Saskatchewan bucks, you know Buddy. This guy and his family have been at this long enough that they’ve basically shaped the way Outfitters and guides operate. Everything about how they operate is first rate.

The plan called for two morning hunts in the stubble fields, setting out a decent decoy spread and, most importantly, being on the birds. Being on the birds for geese in my home state of Michigan means scouting and seeing 30-50 birds in a field. Up there, it means seeing 300-500 birds or more – I’m going to go with more.

These were fresh birds we were hunting, and with that, I was expecting to see a lot. I had no idea.

The decoys were set out in front in a “J” shape with the blinds positioned on the short end. We were using Remington’s new V3 Waterfowl Pro shotguns, loaded up with the company’s new Hypersonic steel shot. Since we were hunting ducks and geese together, and they didn’t know the wind would be so bad, Remington brought #2 shot in 3-inch mags. The #2’s worked good, but in the wind, we had to “dope” for the wind a little more than usual. Still, my first two shots resulted in dead geese, so I can’t complain. 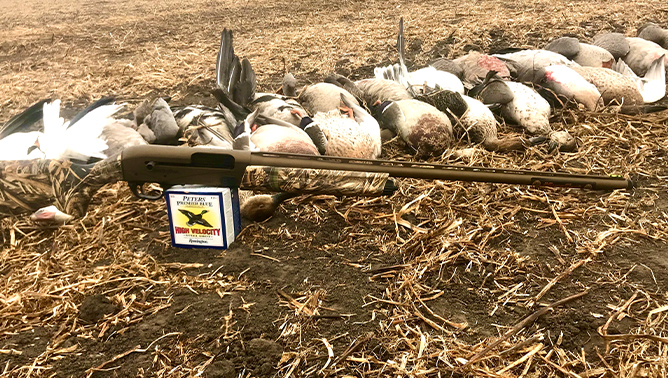 The beauty of hunting fresh birds is that we’d have a flock come in, we’d shoot at them and while the living birds flew off, and other flock would be dropping in. It was truly non-stop action. The only trouble we encountered was the result of said wind. It kept blowing decoys around, which would make some flocks flair before they were perfectly in range. Still we had flock after flock of Canada, Snow and Specklebelly geese, mallards, widgeon, pintail and more ducks, including some diver ducks like bufflehead.

The second day greeted us with sharply different weather conditions. Cloudless skies, little to no wind and warmer temps meanth things should be a little more comforting. However, it would prove to wreak havoc on the guide’s plans. For this hunt, I went off with different hunters than on Day one and with a different guide, one who works for Buddy, however. That morning we were hunting a small slew that previously held a ton of ducks and geese. We were to expect more Canada geese, and a mixed bag of ducks. 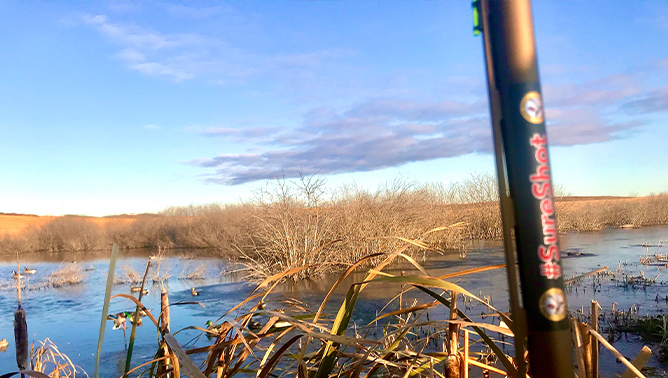 We set up in similar blinds, with a wide assortment of goose decoys on the field side, and a spread of duck decoys on the water. The guide suggested that he had a feeling we’d expect a later and slower hunt than the previous day. He was spot on. Yes, we saw large flocks, but we saw far more scattered groups of birds coming in in small groups, pairs or even singles. Before we’d knew it, we’d spent half the day, shot several cases of shells and had a ridiculous amount of fun. 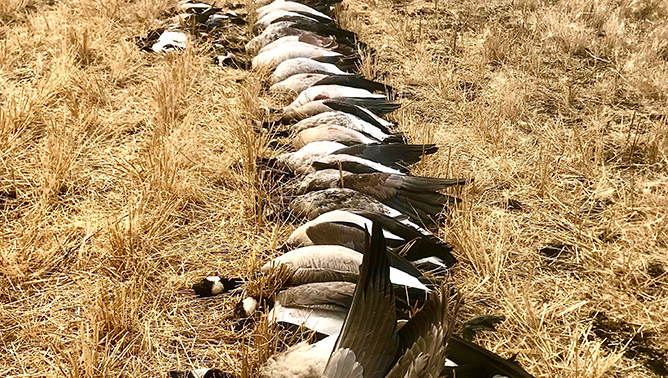 Would I Go Again?

In a heartbeat! We shot limits of birds both days, and in some very rough conditions. We saw even more birds and without a doubt, this is where you need to go to fulfill your waterfowl bucket list. Saskatchewan rolls out the red carpet for hunters and is definitely a destination for hunters of any sort. There is a lot of flat land, but it’s all very scenic too. I think my next trip to the area will be to go for one of the massive whitetails the region is known for. That and I want to bring my family up for waterfowl. They need to experience this too.